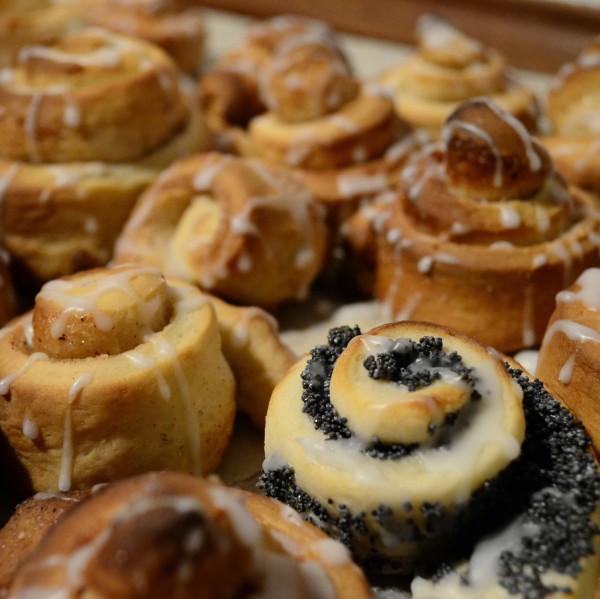 One thing one cannot NOT notice when being in Denmark for a longer time is that they LOVE cinnamon! As you may notice – so do I (more cinnamon recipes to come! YAYYY!) One of my favorites is the cinnamon roll. It looks fancy, is relatively easy to make (although it takes some time) and you can practically eat it all the time! In Germany we have similar rolls, but we mostly fill them with hazelnuts or poppy-seeds. Trying to bring the two neighbors closer together (at least pastrywise) I decided to bake both the poppy-seed and the cinnamon rolls.

Here is what you need for your perfect coffee break:

The recipe I used is taken and adapted from hejsweden.com. As apparent from the domain, it is actually a Swedish recipe, however the main difference in Swedish and Danish cinnamon rolls (as I found) is mainly in the decorations. While it is more common in Sweden to use coarse sugar, they use icing in Denmark which gives them a more fancy look in my taste.

Dissolve yeast in a bowl with room tempered milk. Melt butter and add it to the milk. Add the remaining ingredients and thoroughly knead the dough. Proof yeast dough for 30 minutes under a kitchen towel. Roll out dough until it is roughly 3 mm thick. Take aside 1/3 of the dough for the poppy-seed filling. Melt the butter for the filling and add sugar and cinnamon. Spread the warm liquid filling on the dough. Cut the dough into triangular stripes and roll it starting with the thick end of the triangular. This way the rolls will be higher in the middle. Prepare a sheet with baking parchment and place the rolls on it. Provide each of the rolls with enough space, since they will further rise in the oven. Mix milk, sugar and poppy seeds for the poppy-seed filling and spread it over the remaining dough. Cut and roll like the cinnamon rolls, and put on the sheet. Let the rolls proof for another 20 minutes, in the meantime prewarm the oven to 220°C. Bake the rolls for around 6 minutes until they are golden brown.

Let them cool down on the sheets such that the filling will firm again. Mix icing sugar with water and decorate the rolls with an icing bag. You may also cut off the edge of a freezer bag to decorate them.

Tip: 750 g of flour – that is a lot of cinnamon rolls. And even if you love cinnamon, you will probably not be able to eat all of them before they become dry, unless you have some helpers. Luckily, they work perfectly in the freezer. Give them 45 seconds in the microwave and enjoy them warm, accompanying a cup of coffee. Aaaaah, delicious!

What do you think? Cancel reply

This site uses Akismet to reduce spam. Learn how your comment data is processed.